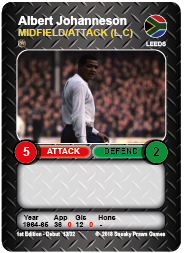 One of the first, super talented, black men to grace the (old) English First Division and the first player from African descent to appear in the English FA Cup Final.

Integral in getting Leeds Utd promoted to top flight football in 1963-64 with 13 league goals, Johanneson built a reputation as a powerful and fast marauding forward player. Naturally skillful he is remembered by Leeds Utd fans as the creative, entertaining force in an otherwise dour team.

A man of outstanding courage, he endured racist abuse from spectators and other players with staggering good grace. George Best later reflected: “Albert was quite a brave man to actually go on the pitch in the first place”.

Time Vault Soccer “doff’s it’s cap” to this quiet and inspirational man with a representation of the 1964-65 season when Johanneson helped Leeds to 2nd place in the old First Division and a F. A Cup Final. A game that saw him make history as the first black man to grace the final but ultimately a game Leeds lost 2 – 1 to a Liverpool side featuring Ian Callaghan and Ian St John.

Strategy Tip: Maybe lacking the out and out goal scoring power of some attackers Johanneson offers a little more in the defensive department. Well suited to a balanced strategy from the start or used as a substitute to replace a more defensive minded player when chasing the game. Enhanced when playing along side players with the “Inspiration” Special Skill.

Figures in (Italics) = stats for their National side.