What is the Time Vault Soccer Card Game?

You build and manage your own team of great, good and interesting Soccer players from across the decades and take on others in a game of football. It lets you answer the question – How would a player from one era fare in another… if you were managing the team.

“Debut 60’s v 70’s” is the Time Vault Soccer starter deck and comes with two pre-set teams ready to play, straight out of the box, and pitches a squad of 16 players from the 60’s against their counterparts from the 70’s.

Highly strategic, no two games ever play the same, for ages 8+, 20 minutes to play, suits any gaming occasion for two players or for multiple players in a cup, league or tournament format, super fun, family friendly and super easy to learn… but a devil to master.

The core game uses a refined version of the original Football Resurrection game mechanics. A how to play Video will be posted here on Friday 9th February 2018.

Players said the following about the original on Board Game Geek:

“What a great game. Best card game I have played in years, fast fun addictive and with multi layers of strategy. Doesn’t matter if you are a football fan or not – this game’s got legs! (Maglore 10/10)

You’ve just given me the best weekends gaming I’ve had in ages. Creative, challenging, awesomely addictive and amazing fun. My throat is hoarse from all the impromptu shouting!” (Tony Ox 9.5/10)

this game is all about game play. It does not shoe horn in a play mechanic for the sake of it and it does not try to be clever. Instead it goes for broke on being fun with game play that is so fluid the game twists and turns with near real football excitement (I never thought I’d say that about a card game!)… could well become the defining football card game (Toby Keane 9/10)

I really liked this game. It captures the essence of Soccer and I’m glad someone came up with an actual playable version of a soccer card game (Hmocc 8/10)

in case it wasn’t clear…

Great game play, game length is perfect, deck construction options are excellent and potential for development is exciting. It’s simple enough to pick up quickly but has enough to keep you interested, thinking tactically and coming back to play. (Prospero 8/10)

Now, we need you:

With 1000’s of game testing hours already under our belts and with deadline day fast approaching, Sneaky F.C are looking for a small number of games testers, that have not already been involved in the games development over the last 12 months, to give the game a final “kick about”.

If you can spare some time to play over the next few weeks, and are happy to provide some feedback (no previous games testing experience required), we’ll send you a game for testing free of charge. Simply get in touch, say Hi and we’ll get right back to you with details. 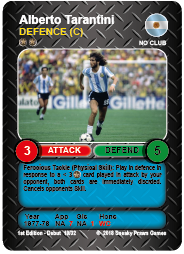 Remember to check back every Tuesday for the “Tuesday Profile” for card profiles and playing tips, which next week features Alberto Taranti – The World Cup winner, with no club!

And don’t forget Friday the 9th February 2018 for the “How to Play” video.

If you can’t wait and have any questions about Time Vault Soccer then don’t hesitate, get in touch… its coming… oooer… n’uff said!

2 thoughts on “About the Time Vault Soccer Card Game”