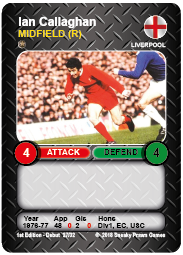 Arguably overlooked by England with 4 caps, Ian was part of the England World Cup winning squad of 1966, making one appearance in the Finals in the 2 – 0 group win over France. A game that saw Ian set up the second goal for Hunt with a deft cross to the far post.

After the arrival of Messers Souncess and Dalglish he decided to leave Liverpool (in 1978) to help Swansea into the then second division in 1979. Loaned out to Lauderdale Strikers and Canberra City and after a brief spell in Ireland Ian closed his illustrious playing career at Crewe Alexandra making his final appearance at the age of 40.

Only ever booked once and voted Football Writers Association Footballer of the Year in 1974, Time Vault Soccer “doff’s it’s cap” to this, proper, footballing legend with a representation of the 1976 – 77 season. The Season that saw Ian usher Liverpool to both League and European Cup glory.

Strategy Tip:  A well balanced midfielder, equally adept at helping out at the back as going forward in support of his attackers. Callaghan may not be your star player but his contribution to allowing you to evolve a flexible in game strategy should not be underestimated. A strategist’s player.

Figures in (Italics) = stats for their National side.